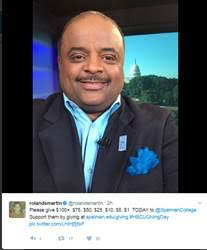 Roland S. Martin, host and managing editor of TV One’s News One Now, has created the fundraising initiative, #HBCUGivingDay, a national call to action in support of raising funds for historically black colleges and universities (HBCUs). For the past week, Martin has represented a different historically black college and university by wearing a lapel pin and then posting the photo on social media using the hashtag, #HBCUGivingDay.

Since that day, Martin has worn lapel pins while hosting News One Now to highlight giving in support of Harris-Stowe State University in St. Louis, Missouri, Grambling State University in Grambling, Louisiana, Virginia State University in Petersburg, Virginia, and Spelman College in Atlanta, Georgia. According to the Pew Research Center, there are more than 100 historically black colleges and universities in the United States. In 2016, it was reported that several HBCU’s saw an uptick in freshman class enrollment, including Dillard University, Tuskegee University, and Shaw University, which nearly doubled.