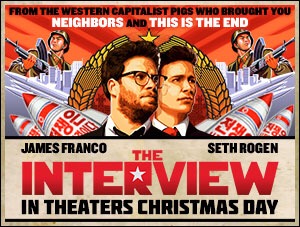 Sony is dropping its planned Dec. 25 release of ‘The Interview,’ the comedy starring Seth Rogen and James Franco that depicts the assassination of North Korean leader Kim Jong Un.

The decision comes after some of the nation’s largest movie theater chains including Regal, Carmike and Cineplex said they were holding back or dropping ‘The Interview’ from screens in the aftermath of a hack that has ballooned from embarrassing disclosures for Sony Pictures executives to involve threats against theaters screening the film.
“Sony Pictures has been the victim of an unprecedented criminal assault against our employees, our customers, and our business,” Sony said in a statement on Wednesday.

“Those who attacked us stole our intellectual property, private emails, and sensitive and proprietary material, and sought to destroy our spirit and our morale — all apparently to thwart the release of a movie they did not like. We are deeply saddened at this brazen effort to suppress the distribution of a movie, and in the process do damage to our company, our employees, and the American public,” the company’s statement said.
The movie portrays the assassination of North Korean leader Kim Jong Un. Hackers who targeted Sony and identify themselves as the Guardians of Peace threatened action against theaters showing the unreleased film in an online posting that invoked the Sept. 11 terrorist attacks. A Department of Homeland Security official said on Tuesday that there was “no credible intelligence to indicate an active plot against movie theaters,” but that it was aware of the threat.