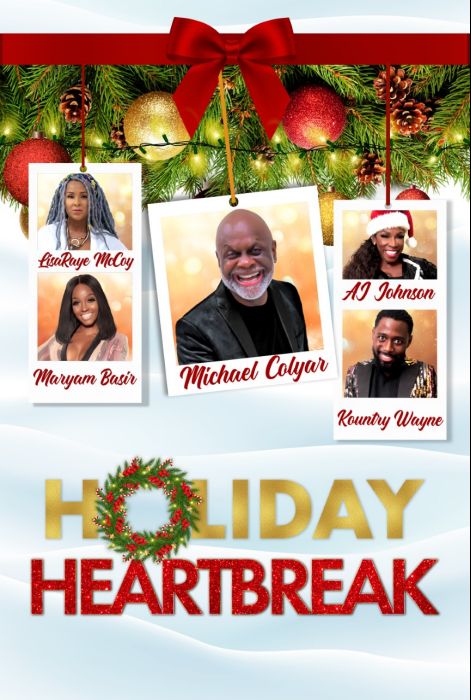 BET announces the premiere of popular film/tv producer Tressa Azarel Smallwood‘s MegaMind new, original romantic comedy Christmas film, Holiday Heartbreak, with LisaRaye McCoy(Single Ladies, Ballers), AJ Johnson (House Party), Michael Colyar and Maryam Basir for premiere on the popular network,Wednesday, December 16th on BET & BET Her at6pm ET/PT and on BET+ on December 20th. Also starring are several of today’s along with some of the biggest influencers including Kountry Wayne, B. Simone and Jay Cole. Smallwood’s fifth film project this past summer was one of the first to meet all stringent, numerous COVID protocols and get the green light to shoot adjacent Washington DC in Maryland’s Prince George’s County.

Directed by Charles Jones, written by Tiffany Yancy and produced by Tressa Smallwood and Ibrahim Yilla,  Holiday Heartbreak, follows a helpless romantic unknowingly cursed with relationship problems passed down from her father’s bad luck of mishandling women. In honor of her 30th birthday, ‘Monica McCoy’ portrayed by Maryam Basir (The Chi, Chicago PD) is looking forward to spending quality time with her childhood friends, and loving father, ‘Mike McCoy’ (Michael Colyar) for the Christmas holiday. They have a very close relationship, the kind little girls would dream about, until their candid conversations culminate with the realization of why Monica believes she is cursed and may never find “the one” emanating from her father’s complicated romantic entanglements with LisaRaye McCoy’s character, ‘Summer St. John,’ and ‘Joyce,’ portrayed by AJ Johnson. Fast forward to her birthday celebration when Monica instantly falls in love with a chauvinistic philandering comedian, ‘Wild Bill,’ portrayed by Kountry Wayne.