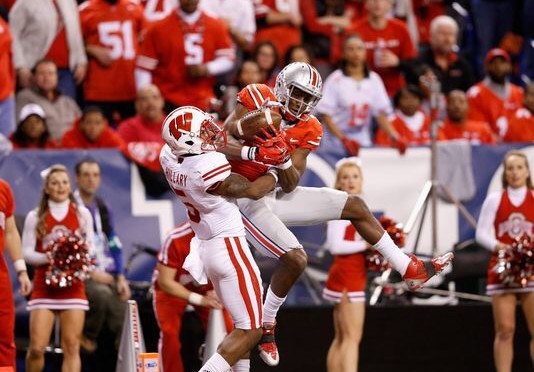 Ohio State made its case for a spot on the College Football Playoff in impressive fashion on Saturday, rolling over Wisconsin, 59-0, in the Big Ten Championship game in front of 60,229 at Lucas Oil Stadium.

The Buckeyes (12-1), who are ranked No. 5 in the playoff poll, scored less than two minutes into the game and never looked back. They punted only twice in the first half — one was a Big Ten title game record 73-yarder — and scored every way imaginable.

Sophomore quarterback Cardale Jones, starting for the first time in place of the injured J.T. Barrett, finished with three touchdown passes and was 12-for-17 for 257 yards. His three scores all went to senior Devin Smith, who had four catches for 137 yards while sophomore running back Ezekiel Elliott ran for 220 yards and a pair of touchdowns. His first was a championship game record 81-yarder.