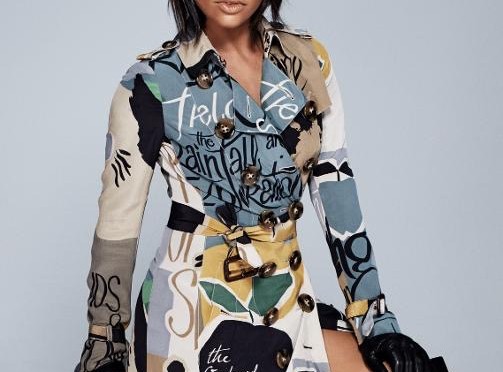 “The fact that I can do a press junket for a movie and people ask me what’s happening in my uterus says a lot,” she told Yahoo Style. “They want 110 percent of what you have to offer. But now that I’ve been given a voice, I’m going to use it.”

Yahoo Style: You play a broadcast journalist on Being Mary Jane. Are you a news junkie?

Gabrielle Union: In my real life, I watch a lot of CNN. It’s on right now. It’s kind of one of those things that’s always on in the background in general. Most days I read three newspapers. I read the Miami Herald, the Los Angeles Times, and the New York Times. I’ve always been very interested in the news. It’s about wanting to be informed, and wanting to hear different perspectives on thing. A lot of people think about the same thing a lot of different ways.

YS: What do you think about the news these days? Many people seem fed up with what they see as persistent racism in this country, specifically regarding what happened in Ferguson and Eric Garner’s death in New York, but on your Instagram you seem to be staying positive.
GU: There’s a bit of a gap between what I really want to say and what I know is responsible to say. The general lack of compassion for your fellow man is really frustrating. I think what the protesters are saying, or at least some of them, is it’s not just about police brutality. It’s about a widespread systematic crippling of some people in this country by birthright, and no one’s acknowledging it. There may be a power shakeup if you’re really going to do something about it. A lot of people aren’t interested in that. They say, “It’s not that bad. We have Barack Obama. We’re good.” Or, “You’re not getting lynched.” They’re not acknowledging the institutional racism that impacts daily lives.

YS: What do you think about actors and athletes being political these days, like LeBron James when he wore an “I can’t breathe” T-shirt, which referred to the last words Garner said before he died? It’s so different from the days when Michael Jordan didn’t say anything.
GU: People have always had their own personal views, but they weren’t challenged. I don’t think there’s any footage from back then where Michael Jordan was asked about an issue. I’ve known Michael for a long time, and I couldn’t tell you what his views are. It’s not something that comes up. He’s from before there was social media. In this day, there’s a news story about celebrities every second. People are demanding a lot more. The fact that I can do a press junket for a movie and people ask me what’s happening in my uterus says a lot. They want 110 percent of what you have to offer. But now that I’ve been given a voice, I’m going to use it.

YS: You’re a Neutrogena ambassador and have been so for a long time. What do you think about makeup for women with brown skin these days? Are there more choices?
GU: It has gotten better. There are so many more lines that create shades for a wide range of hues and understand our green money works as well. And that we count. We want to look pretty, too.

YS: You’ve been open about asking Dwyane Wade to sign a pre-nup because, as you said, “I gotta protect my stuff.” Why was it important for you to be seen as a strong, independent woman?
GU: For women in Hollywood, when they’re coupling, everything is about the brand. Everything is about latching on to a rising star, so you can kick your heels up. That’s never been my story, ever. I make sure to let people know all of the hard work that’s gone into my career. I want people to know the work that it took to get through UCLA, that I had student loans and worked. I was eating Top Ramen and lived well below my means. Now that it’s time to get married to a man who happens to play basketball and has done well for himself, I want to make it clear that I have in no way hitched my wagon to his star. I have my own wagon.

YS: You’re a huge football fan. Is it hard to retain your fandom after some of the domestic violence and bad actions done by Ray Rice and other players this year?
GU: The biggest thing is that the NFL is a business. It’s professional sports, and there are 55 guys on a team. If there’s one guy out of 55 who’s done something horrible, you can’t taint the other 54 with the same brush. But in the sense that a guy committing domestic violence received a less harsh penalty than players did for smoking weed, in that regard [NFL commissioner] Roger Goodell has failed miserably in bringing the NFL to a more enlightened time. If he’d talked to his customers, they’d much rather have Cheech and Chong on the field than the villain in a Tyler Perry movie. The NFL is a microcosm of all industries. Domestic violence affects Wall Street, teachers, and policemen. We have a lot of work to do as a league, but we also have a lot of work to do as a society.

YS: On Being Mary Jane, the character starts out in love with a married man. Is she a home wrecker?
GU: I think initially he is a home wrecker. He was dishonest. He started a relationship under false pretenses [by not telling her he was married], but I think she became a bit morally bankrupt on the way. That narrative is important to tell, which is why I was all for the story line. It shows what happens and all of the people who are affected in an affair. I look at it as a morality tale.

YS: What else have you done to make Mary Jane more real?
GU: Having her in Uggs and the sweatpants at home was big. When people on television are home, their casual wear isn’t really casual. There’s a scene where I walk in and take off my bra and cutlets and slap them down on the table. She’s got to get comfy. Personally, I strip down and change the second I get home.

YS: Being Mary Jane is often compared to Scandal. Does this bug you?
GU: What bugs me is that they’re making the comparison because they’re both shows that star black women. It’s such apples and oranges. It’s like comparing True Detective and Law & Order — you would never do that. What it says is we need so much more diversity in TV. We need shows starring women of color or women of a certain age or women who aren’t a size 2. If that happens, the world isn’t going to end.

6 thoughts on “Gabrielle Union talks SCANDAL and BEING MARY JANE”