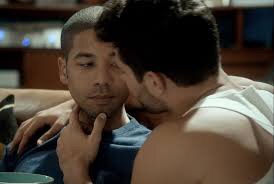 FOX’s hit series Empire proved that some things can take a little while to get used to, like the image of two gay lovers kissing on TV. We’ve seen it before in other shows, but for some reason, Black people aren’t quite ready for it yet.

“The test audiences they showed this to…the ratings plummeted,” Kang said. “They did not like that scene at all.