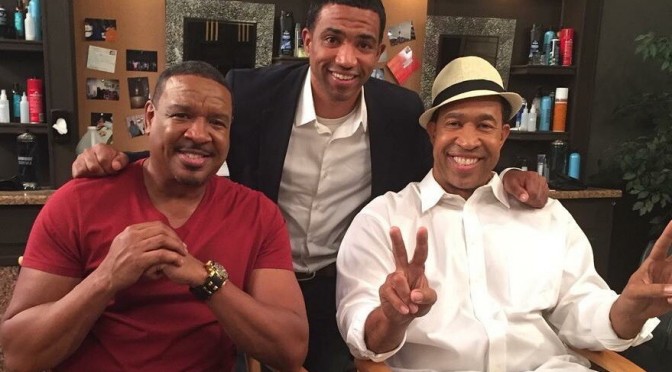 Kingsmen Media was invited on set to watch the taping of Bounce Tvs new show In The Cut which centers on Jay Weaver ( Dorien Wilson The Parkers) and Kenny Clark (Ken Lawson The Parkers) this time they reunite as father and son. Based in San Diego Dorien runs a barbershop were his newly divorced son Ken is dealing with some personal issues. Jay brings Ken in to live with him and help him run the shop.

With a great cast of familiar talent from John Marshall Jones (Smart Guy) as Jays hilarious sidekick and his ex wife played by Jackee Harry (Sister Sister). The chemistry between everyone was like one big family. Other cast members include comedic actress Laura Hayes and Chasity Dotson (Single Ladies) also a guest appearance from comedian Michael Blackson. In The Cut is executive produced by show runner Bentley Kyle Evans (Martin Jaime Foxx) Trenten Gumbs III and Ri-Karlo Handy and will air on Bounce Tv August 25

Check out some Bonus Footage of Cameron at his L.A. PhotoShoot

Behind The Scenes w/ Cameron Penny from KINGSMEN MEDIA on Vimeo.