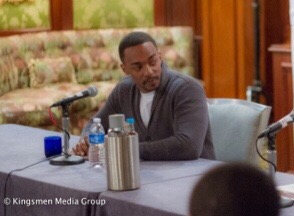 The nominations announcement will be carried live on TNT TBS, truTV, sagawards.tntdrama.com and truTV.com at 10 a.m. (ET) / 7 a.m. (PT). SAG-AFTRA President Ken Howard will introduce Faris and Mackie. Prior to the announcement, this year’s stunt ensemble honors nominees will be announced by SAG Awards® Committee Chair JoBeth Williams and Committee Member Jason George during a live webcast on sagawards.tntdrama.com 9:50 a.m. (ET) / 6:50 a.m. (PT).

Anthony Mackie, who was classically trained at the Juilliard School of Drama, is a critically acclaimed actor who is able to capture a plethora of characters.

He currently stars in Seth Rogen’s holiday hit The Night Before and Paul Bettany’s Shelter with Jennifer Connelly. In February 2016 he will star in Triple 9 opposite Woody Harrelson and Kate Winslet. Mackie just wrapped production on the HBO adaptation of the Tony Award-winning play All the Way, in which he plays Martin Luther King Jr. opposite Bryan Cranston’s Lyndon B. Johnson.