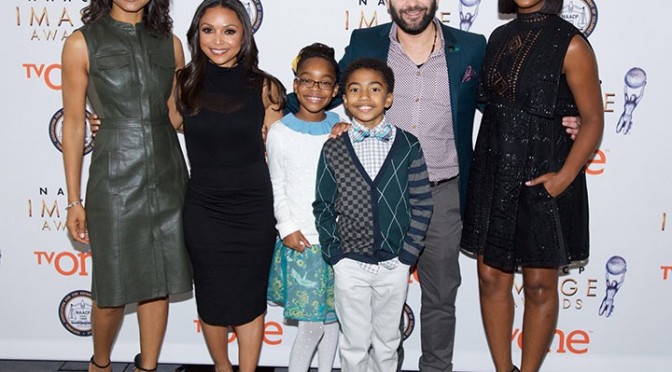 The nominees for the 47th NAACP Image Awards were announced today during a press conference from The Paley Center for Media in Beverly Hills, CA. The categories and nominees were announced by Guillermo Díaz (Scandal), Tika Sumpter (The Haves and the Have Nots), Danielle Nicolet (Born Again Virgin), Marsai Martin (Black-ish), and Miles Brown ( Black-ish). In addition, the event was live streamed and special commentary was provided by Nischelle Turner (Entertainment Tonight).
The NAACP Image Awards celebrates the accomplishments of people of color in the fields of television, music, literature and film and also honors individuals or groups who promote social justice through creative endeavors. Winners will be announced during the two-hour star-studded event, which will broadcast LIVE on TV ONE on Friday, February 5, 2016 at 9pm/8c as a two-hour special. A one-hour pre-show will air live from the red carpet at 8pm/7c.
“The Image Awards celebrates individuals who model principles of hard work, perseverance, and community empowerment and with the announcement of this year’s nominees the NAACP continues to spotlight the achievements of those in our community,” stated Roslyn M. Brock, Chairman of the NAACP National Board of Directors. “We have enjoyed a great collaboration with TV One and look forward to working with them again this year to create a memorable evening of entertainment.”

“The NAACP Image Awards has become more than just a ceremony, but an institution for artists and social justice warriors of color to be recognized and celebrated,” stated Cornell William Brooks, President and CEO, NAACP. “As the Image Awards continues to grow and evolve, the principles of social justice will remain at its core.”
ABC and BET lead the nominees in the TV categories with 28 and 13 nominations respectively, followed by FOX with 12. In the recording category, Columbia Records leads with 10 nominations, followed by RCA with 9 nominations and BMG with 6 nominations. Warner Brothers leads with 6 nominations, while Universal Pictures and Netflix both received 5 nominations in the motion picture categories.
The 47th NAACP Image Awards is sponsored by AT&T, Bank of America, Chrysler-UAW, FedEx, Ford Motor Company, General Motors, Hyundai Motors of America, Southwest Airlines and Wells Fargo.