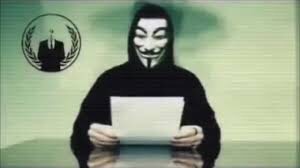 Dear Donald Trump, we have been watching you for a long time and what we see is deeply disturbing,” a masked Anonymous member begins in the recording. “Your inconsistent and hateful campaign has not only shocked the United States of America, you have shocked the entire planet with your appalling actions and ideas.”
Anonymous says it has a detailed plan for taking down The Donald. On April 1, for example, the group plans to take down TrumpChicago.com. The collective also plans to destroy his brand by unearthing dirt that discredits his image. Already, the group has hacked Trump’s voicemail and leaked the messages.