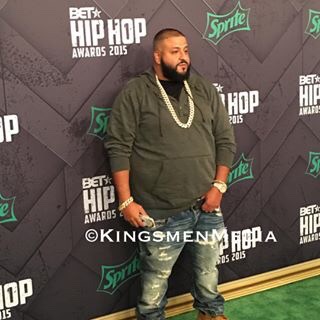 BET Networks scores “another one” as multi-platinum artist, mega-producer and ‘Anthem King’ DJ Khaled is named as host of the 2016 BET “Hip Hop Awards”. Not only is DJ Khaled hosting but he demonstrates the “major key to success” by scoring 9 BET Hip Hop Award nominations including ‘DJ of the Year,’ ‘Best Hip-Hop Video,’ ‘MVP of the Year,’ ‘Track of the Year,’ ‘Album of the Year,’ ‘Hustler of the Year,’ ‘People’s Champ Award,’ and two nods for ‘Best Collabo, Duo or Group.’
“I am extremely honored to be a part of such an incredible show that has watched me grow as an artist and mogul throughout my career,” said DJ Khaled. “The Hip Hop Awards are synonymous with a night of stellar performances and tributes to the greatest hip hop artists of our time. I am excited to bring cloth talk and the major keys to the Hip Hop Awards for an iconic and memorable show!”

DJ Khaled has been one of the most respected and celebrated artists in the industry with hits climbing the charts for the past decade. The multi-platinum artist recently celebrated his first-ever #1 album debut on the Billboard 200 Chart with the hit album MAJOR KEY, featuring his BET “Hip Hop Awards” nominated song, “I GOT THE KEYS”. Since being crowned the “King of Snapchat,” DJ Khaled has amassed a following of over 7 million Snapchat followers and racked up millions of views on his Snapchat “stories”.

“DJ Khaled has made waves as the most influential pop culture star of the year and it is an honor to have the Snapchat King himself hosting the BET “Hip Hop Awards” 2016,” said Stephen Hill, BET Networks President of Programming. “We can’t wait to see his incredible energy, humor and “major” keys brought to life in the show!”