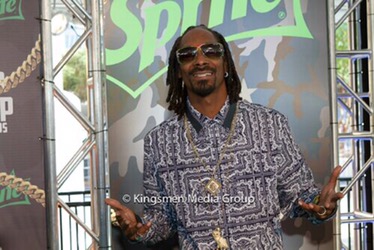 The “I Am Hip Hop” Award returns to honor entertainment icon and legendary rapper Snoop Dogg. Highly respected with more than 20 years in the industry, Snoop continues to set trends and pave the way for both new and established artists. Snoop defines hip-hop history. He is undoubtedly one of the most recognized and respected entertainers of all time. Hailing from Long Beach, CA, Snoop began his career under the guidance of Dr. Dre and became a multi-platinum artist who set records with his seminal album Doggystyle, which debuted at #1 on the Billboard 200 chart and sold over 800,000 copies in the first week. Throughout his career, Snoop’s produced chart-topping hits including “Gin & Juice,” “Who Am I? (What’s My Name?),” “Nuthin’ But A ‘G’ Thang,” “Next Episode,” “Beautiful,” “Drop It Like It’s Hot,” “Signs,” “Sensual Seduction” and “I Wanna Rock.” He garnered chart topping success with his first album, Doggystyle (1993), which climbed its way to the No. 1 spot on Billboard’s hip-hop and Top 200 charts. His sophomore album, Tha Doggfather (1996), also achieved chart topping success. He continued to top the hip-hop charts with his next two albums: Da Game Is To Be Sold, Not To Be Told (1998) and No Limit Top Dogg (1999). Most recently, the West Coast Rapper released his 14th studio album COOLAID, featuring the hit single “Kush Ups” with Wiz Khalifa. Snoop’s career has transcended industry lines with award-winning and multi-platinum albums and songs, as well as critically acclaimed films and television shows, including his weekly “GGN News” series on his WestFestTV YouTube channel. His philanthropic efforts are also well documented and his pioneering ventures, “Leafs by Snoop,” a cannabis product line and MERRYJANE.COM, a media platform, are already business and tech industry leaders.

And the hottest night in Hip Hop is only getting started as the “King of the South” T.I. is confirmed to perform; Atlanta’s own Gucci Mane marks his long awaited return to the stage; Travis Scott will bring another hot performance; as well as performances by Young Thug and Desiigner. The list of confirmed performers doesn’t stop there; also bringing the heat for this year’s BET “HIP HOP AWARDS” is Lil Uzi Vert, Lil Yachty, 21 Savage, Dae Dae, Big Baby D.R.A.M. and Isaiah Rashad. Presenters for the BET “HIP HOP AWARDS” 2016 include the star of Empire and BET’s The New Edition Story, Bryshere Y. Gray and rapper and actor Shameik Moore.