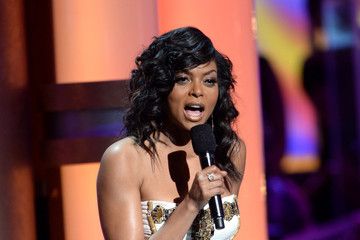 Today, BET Networks announces Taraji P. Henson as the host of the “BLACK GIRLS ROCK!™” 2017 Awards, which will tape on Saturday, August 5, 2017 at the New Jersey Performing Arts Center’s Prudential Hall in Newark, NJ and premiere on Sunday, August 20, 2017 at 8:00 P.M./ET on BET. Created by celebrity DJ and women’s empowerment advocate Beverly Bond, the “BLACK GIRLS ROCK!™” 2017 Awards honors the groundbreaking achievements of Black women who have fearlessly broken barriers in the areas of art, business, entertainment and community service.

“I’m honored to host the ‘BLACK GIRLS ROCK!™’ Awards. I love the message and I love Beverly Bond and her vision. I was lucky to be honored in 2011. It is truly a highlight of my life. Now I’m back to be part of this amazing night to honor the strong and powerful Yara, Issa Rae, Roberta, Suzanne, Derrica and Natalie. Let’s make history together as we come together as women of brains, beauty and in support of each other,” said Henson.

Taraji P. Henson starred in the Academy Award nominated FOX Feature Hidden Figures based on the life of Katherine Johnson at NASA. The cast received Best Ensemble at the 2017 Screen Actors Guild Awards. Taraji received the 2016 Golden Globe for Best Actress in Drama Series, Critic’s Choice Award and two Emmy nominations for her star turn as Cookie Lyon in the groundbreaking and award winning hit series Empire. Taraji released her NY Times Best Seller Around The Way Girl published by Simon and Schuster October 2016. She stars in the three features Acrimony/Lionsgate, Proud Mary/Sony and the independent film Best of Enemies set for release in 2018. Taraji has received seven NAACP Image Awards for Outstanding Actress and Entertainer of the Year. She also received five BET Awards for her work in film and television.