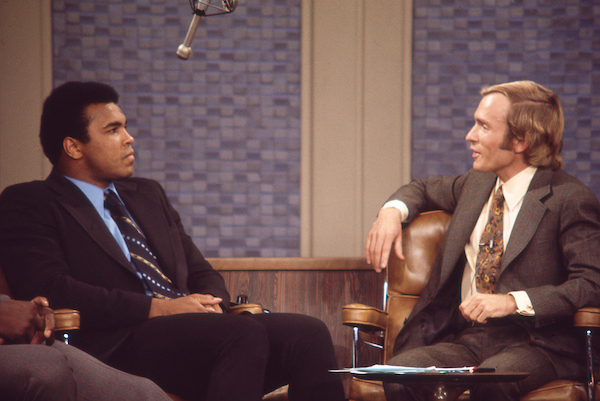 ALI & CAVETT: THE TALE OF THE TAPES, A Vibrant Portrait Of Boxing Legend Muhammad Ali Through The Lens Of His Frequent Appearances On
“The Dick Cavett Show,” Debuts February 11, Exclusively On HBO

Between 1968 and 1979, boxing superstar Muhammad Ali appeared on the Emmy® winning “Dick Cavett Show” no less than fourteen times. With natural charisma, quick wit and playful pugnacity, Ali was a perfect foil for the sophisticated broadcast host, and together they struck television gold. Whether discussing his prowess in the ring, the status of race relations in America or his controversial decision to refuse induction into the army during the Vietnam War, Ali was an entertaining and provocative guest.

Interweaving clips from the show with new insight from Dick Cavett himself, as well as expert commentary from authors, sports commentators and civil rights activists, ALI & CAVETT: THE TALE OF THE TAPES, debuting TUESDAY, FEB. 11 (9:00-10:40 p.m. ET/PT), is a fascinating time capsule in which the issues of the era play out between two men who formed an unlikely and enduring bond.

The film will also be available on HBO On Demand, HBO NOW, HBO GO and partners’ streaming platforms.

The world first heard of Muhammad Ali, then known by his birth name Cassius Clay, when he won the light heavyweight gold medal at the 1960 Rome Olympics as an 18-year-old boxing prodigy.  He decided to use his newfound fame to bring America’s attention to racial, religious and political injustice, and elicited difficult conversations about these issues in American homes.

Appearing on “The Dick Cavett Show,” Ali found a willing sparring partner in the intelligent, eponymous host. Ali’s jocular manner proved to be a successful formula in discussing matters that were usually off limits on other talk shows. “He would say things to Cavett about whites that you’d hear on the street corners of Harlem,” remarked civil rights activist Rev. Al Sharpton. “They seemed to go to the edge of the racial debate in the country.”

In 1967, citing religious and moral objections, Ali refused to serve in the Vietnam War and was convicted and stripped of his heavyweight title. Facing years in prison, he appealed all the way to the Supreme Court where his conviction was overturned, but by that point, Ali had been unable to fight professionally for three years. During this time, he was a frequent guest on “The Dick Cavett Show,” where he engaged in deep conversations about his identity, his political and religious views and social issues. “There was a period in my life when I felt that Muhammad Ali was my best friend,” reminisces Cavett, who praises his ability to bridge cultural and racial divides.

When he returned to fighting in 1970, Ali played for big money and big crowds. Win or lose, he was always welcomed back by Cavett. “You are really my main man, because this is the only show that invites me right after I get whipped,” Ali joked about his jaw broken from a clash with Ken Norton. Legendary fights with Joe Frazier and George Foreman followed, and Ali’s flamboyance outside the ring was matched only by his bravura in it. Over the next decade, Ali would make boxing history, becoming the first three-time heavyweight world champion.

More than just a nostalgic trip down memory lane, ALI & CAVETT: THE TALE OF THE TAPES also stands as a window into our present world, exploring how Ali came to symbolize something greater than boxing.  By the time he carried the Olympic torch at the 1996 Atlanta Olympics, his hand trembling from Parkinson’s disease, Ali’s legacy was immortalized as a beacon of equality and political conviction, a true champion whose impact on the Civil Rights movement and the world rivals his feats in the boxing ring.