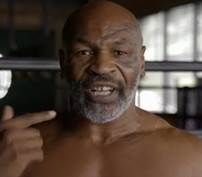 Legendary former Undisputed Heavyweight World Champion, and entrepreneur Mike Tyson, and Eros Innovations have launchedMike Tyson’s Legends Only League, a next-generation sports venture that provides full support and infrastructure to the world’s greatest athletes, bringing the best of the best back to the ring, onto the court, and back on the field. The league will span live sporting events including tennis, basketball, boxing, and more.

“It’s always been a dream of mine to create, build, and honor athletes,” said Tyson. “All athletes live to follow their dreams and fight for excellence. It’s something that is inherent in each of us and that drive never goes away. Legends Only League will support athletes in their individual sports, creating some of the most epic competitions, products and live events in the world.”

Tyson, 54, kicked off his illustrious career at 20 years old when he became the youngest boxer to win a heavyweight title, a record he still holds to this day. Throughout his career, Tyson held the title of Undisputed World Heavyweight Champion from 1987 to 1990 and was also the first heavyweight boxer to simultaneously hold the WBA, WBC, and IBF titles.