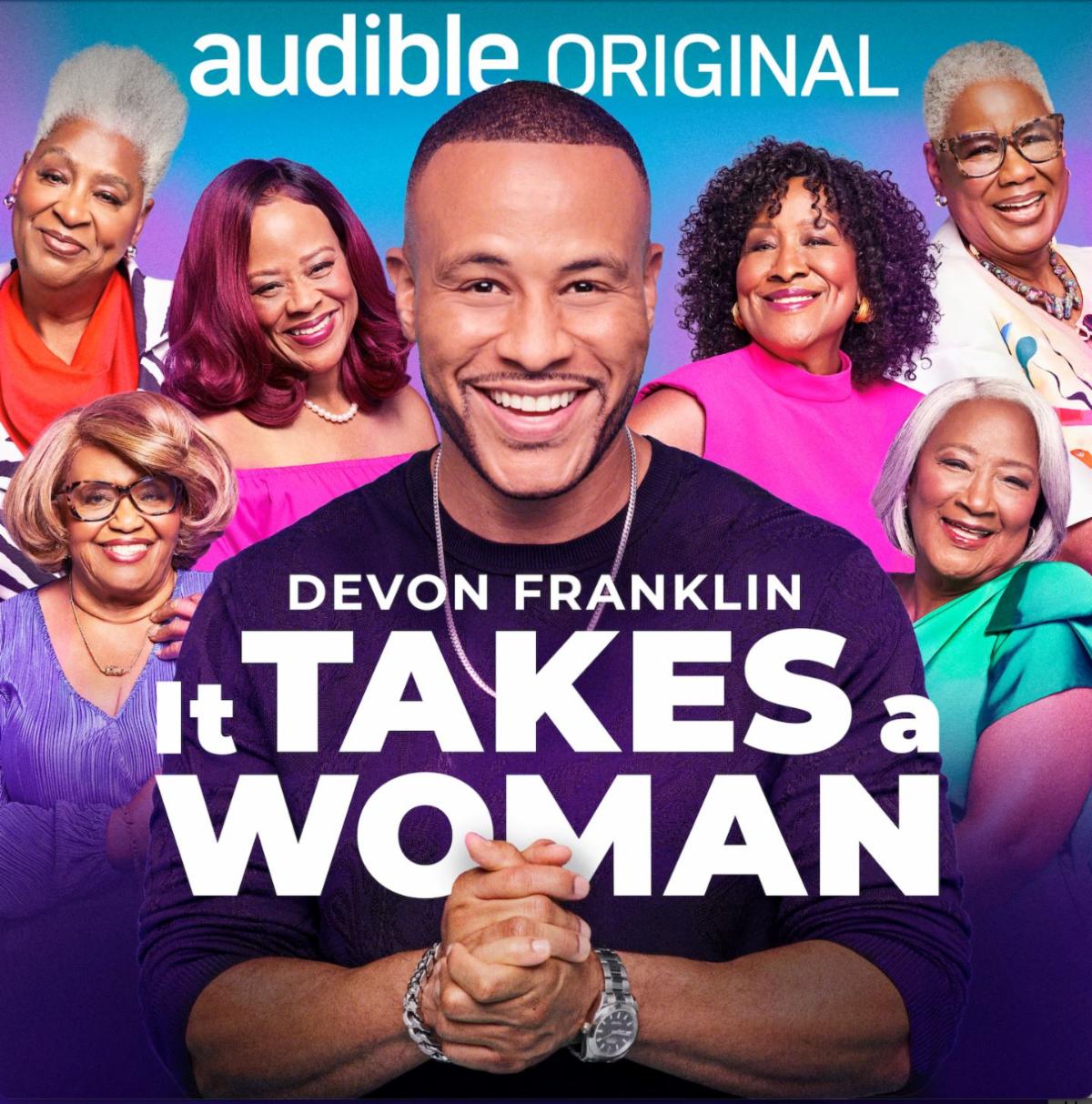 “IT TAKES A WOMAN”

Hollywood producer and bestselling author DeVon Franklin offers a personal twist on the African proverb that says “It takes a village to raise a child” — It Takes a Woman. In this riveting and soul-stirring Audible Original, Franklin’s first audio-only memoir, he introduces us to the women who raised him: a “village of love” that selflessly came together to shape DeVon into the man he is today. It Takes A Woman is available on Thursday, April 21 at Audible.com.

For the first time publicly, Franklin and his family discuss the aftermath of his father’s untimely death and the despair that could have destroyed their future. It Takes a Woman offers listeners an emotional journey of tragedy, triumph, and healing as Franklin, his mother, and his five living great-aunts recall how the women heeded the call to help raise him and his two brothers. The candid conversation—covering everything from marriage, death, divorce, and regret to colorfully frank advice about dating, sex, and money—uncovers old wounds that are still fresh and pain that is still piercing, as well as a family bond that is unbreakable.

The women’s willingness to open their hearts and souls elevates this listen beyond simple memoir. Guided by their faith, they share decades of hard-earned life experiences and inspiring lessons. It’s the foundation of love and communication that nurtured Franklin and his brothers, and one that will inspire listeners to embrace this village as their own.

It Takes a Woman, one family’s true story of hope, faith, and resilience, honors the sacrifices of a remarkable village of Black women as experienced through the eyes of a Black man. It’s also a universal celebration of the power of women to alter and enrich the lives they touch. For more information, visit audible.com.

Named by Variety as one of the “Top 10 Producers to Watch” and by Oprah as “a different kind of Spiritual Teacher,” DeVon Franklin is a Hollywood Producer and New York Times bestselling author blazing his own unique trail with an unwavering commitment to uplifting the human spirit through entertainment.

DeVon serves as President and CEO of Franklin Entertainment, a dynamic production company in conjunction with Paramount Pictures and CBS TV Studios. He’s the driving force behind some of Hollywood’s most successful inspirational films including BREAKTHROUGH and MIRACLES FROM HEAVEN, as well as the soon to be released movie FLAMIN’ HOT for Disney and KINGDOM BUSINESS television series for BET.

In addition to his work as a producer, DeVon is also the author of multiple bestselling books such as THE SUCCESS COMMANDMENTS and his new Audible Original IT TAKES A WOMAN, which is a deeply personal look into the tragedy that transformed his family’s life forever.

DeVon serves the greater Hollywood community at large as Vice-President of the Board of Governors for the Academy of Motion Pictures Arts & Sciences. DeVon is a graduate of the University of Southern California and lives in Los Angeles.