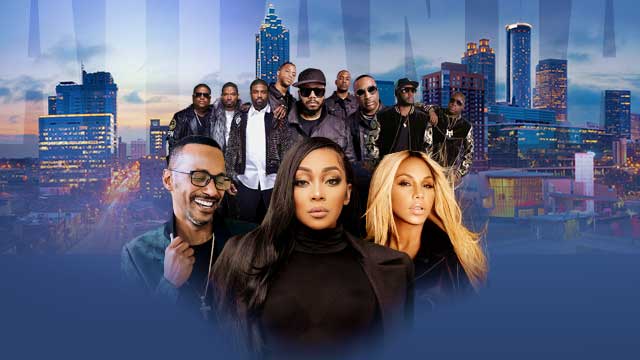 Atlanta R&B Music Experience will come to the award-winning State Farm Arena in Atlanta on Saturday, Oct. 1, 2022, in an event promoted by Global Events Production. The event will feature world-renowned R&B artists Monica, Tevin Campbell, H-Town, Tamar Braxton and Next. Tickets go on sale to the general public on Friday, July 22 at 10 a.m. via Ticketmaster.com.

Monica is a Grammy® Award-winning and multi-platinum artist, 25-million-plusselling singer, actress, philanthropist and entrepreneur. She was born and raised in Atlanta and was the first artist ever to have #1 Billboard singles in three consecutive decades, which puts her in the elite company.

Tevin Campbell went from singing in his Texas church to being a muse for the likes of Quincy Jones and Prince, thanks to his yearning countertenor and deep reserves of emotion. Campbell sang with the supergroup Black Men United, made TV and movie cameos, and released two more albums, 1996’s Back to the World and 1999’s Tevin Campbell.

The Houston R&B group H-Town referenced classic soul on steamy ’90s hits like the unforgettable ‘Knockin’ Da Boots.’ Brothers Keven “Dino” Conner and Solomon “Shazam” Conner formed the group—originally known as The Gents—with Darryl “GI” Jackson while the three were in high school. They were signed by Luther “Luke” Campbell of 2 Live Crew fame and renamed H-Town, with Dino positioned as the lead singer. Their 1993 debut album, ‘Fever for da Flavor’, went platinum and topped the R&B chart on the strength of their libidinous debut single, “Knockin’ Da Boots,” which reached No. 3 on the Billboard Hot 100. H-Town released two more albums – ‘Beggin’ After Dark and Ladies Edition’, ‘Woman’s World’ – that went gold.

Tamar Braxton was born in 1977 in Severn, Md., where she and her siblings got their start in their father’s church choir. After her solo debut album in 2000, she became an R&B powerhouse with 2013’s ‘Love and War.’ Braxton’s second solo album debuted at No. 2 on the Billboard charts and garnered three Grammy® nominations. She went on to earn three GrammyÒ nominations in 2015 for her album ‘Calling All Lovers’ and another in 2016 for her hit, ‘If I Don’t Have You.’