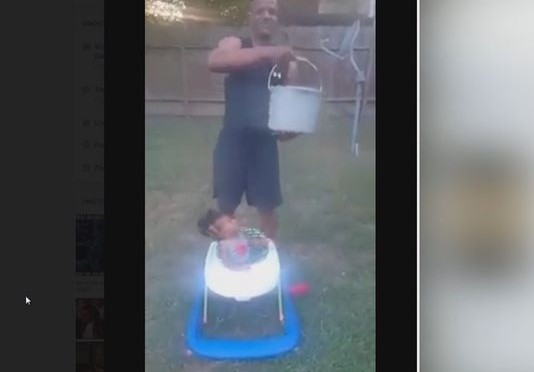 The grandfather dumped a bucket of ice cold water on his 10 month old grandchild.

After video was posted on Facebook, the child’s father, Claude Dalcour, says he and his friends couldn’t believe what they were seeing.

I was shocked,” said Dalcour. “Everybody I know was pretty much shocked and appalled.”

Dalcour says he’s going through a messy divorce with his child’s mother and his ex father-n-law only fanned the flames by dumping water on his child.

“You don’t do that to an infant,” said Dalcour. “He should know better.”

Local affiliate KHOU showed the video to strangers and all of them agreed with the child’s father.

Apparently, one concerned person who saw the video on Facebook sent it to Child Protective Services.

Dalcour says after watching the video, he took it to police.

The father also said the grandfather’s actions were also “disrespectful.”