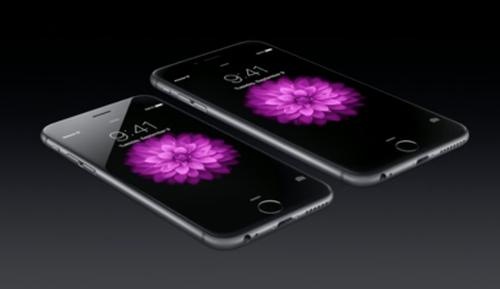 And then, five seconds later, he announced an even larger one.

Both the devices feature rounded edges and are slightly slimmer than the iPhone 5s. Apple also says battery life has been improved on both devices, and both come with improved cameras.

The larger screen size is the most notable change about this year’s iPhones. From the first iPhone in 2007 through the iPhone 4s in 2011, Apple maintained a display size of 3.5 inches, measured from one corner to its diagonal. In 2012, with the iPhone 5, it increased the display to 4.0 inches; last year’s iPhone 5s maintained that size. This year’s bump to 4.7 and 5.5 inches represents another large jump and brings Apple’s flagship devices closer in screen real estate to Samsung’s Galaxy S5 (a 5-inch screen) and Galaxy Note 4 (5.7 inches).

Apple has been under increasing pressure from financial analysts to up the screen size of its smartphones. Despite record sales in each successive year, Apple has not dominated the smartphone market in countries like China and India, where shoppers have flocked to devices with larger screens from companies like Samsung and LG. The bigger iPhones are seen as an attempt to appeal to those potential customers, who would have otherwise dismissed the iPhone as unrealistically small.