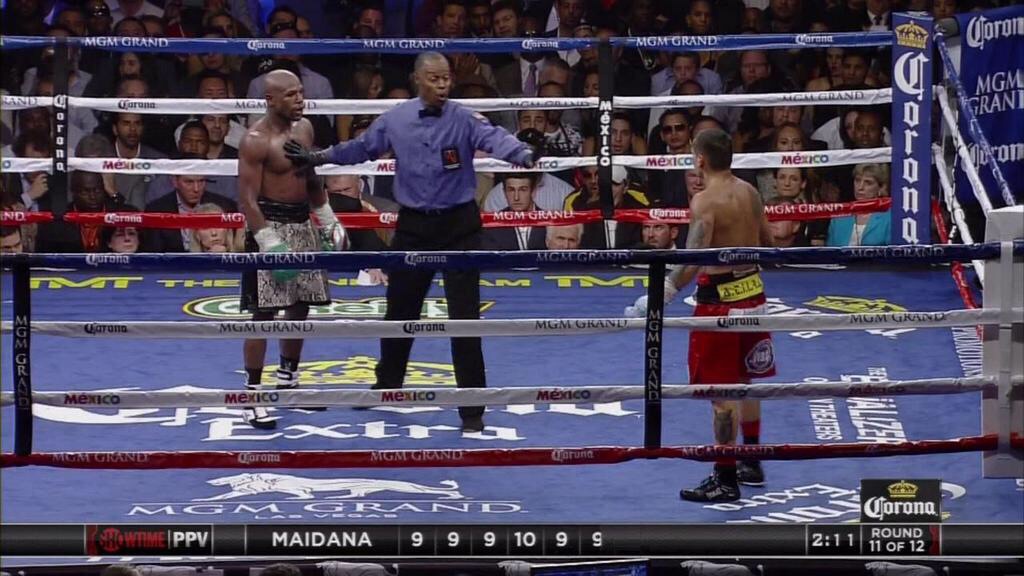 As Mayweather entered the ring just after the national anthem, he was greeted by one of the few people who have more money than he does: Warren Buffett. As the fight begins
Maidana swings wildly and misses. Mayweather jabs. Both fighters feeling each other out. Floyd slips and hits the canvas. No knockdown. Mayweather avoiding Maidana. Mayweather connects, and Maidana returns a right.

Mayweather wins the round on my card, up 2-1.

The fighters come at each other throwing. Maidana attacks Mayweather in a corner. Maidana coming after Mayweather in this round. Maidana hitting hard to the body of Mayweather. Left jab connects. Mayweather spending a lot of time on the ropes and getting hit often. Both connect with a right. Mayweather with a right to the head. Mayweather not moving near as much as in the first three rounds. Triple jab by Maidana ends the round, and he throws another right after the bell.

Maidana wins the round 2-2.

Mayweather looking kind of winded in his corner. Mayweather countering well. Then throws an overhand right. Another right by Mayweather connects. Mayweather staying off the ropes this round, in the center of the ring, connecting on a jab and a straight left. Maidana feints several times in the last 15 seconds, but does not connect. Round for Mayweather. 3-2 for the champ.

Mayweather comes out jabbing. Doing a great job of avoiding Maidana punches with terrific footwork. Maidana looking frustrated by not connecting, but he does get off a left and a right on the ropes. The fighters exchange on the ropes. Maidana counters a Mayweather right. Maidana attacks in the corner as the bell rings.

In my book, another Mayweather round. He’s up 4-2.

Mayweather connecting on an amazing 52% of his punches through the first half of the fight. Maidana swings wildly and just misses with a roundhouse right. Not much action early in the seventh. Maidana and Mayweather connect on rights at the same time. Maidana goes to the body but Mayweather counters with body shot. At the bell, Mayweather drops in a late right.

Mayweather taking Maidana’s punches well. Maidana hits behind the head and is warned by Kenny Bayless. Floyd throws a one-two, connecting with the right. Mayweather gets Maidana on the ropes and connects with a short, hard right. Right by Maidana, and Mayweather counters. Mayweather says Maidana bit his glove. Bayless says he didn’t see it. Mayweather says he actually bit his fingers. They’re fighting again, Mayweather throws a counter left, and the round finally ends. Weird stuff. Mayweather looked like he was holding his glove in Maidana’s face. Mayweather 6-2.

Floyd warned by Bayless for clinching and holding. He does it again and Maidana, with his right hand held, hits Mayweather with his left. Maidana connects with a right to the body. Counter left by Mayweather. Maidana comes at Mayweather on the ropes and Mayweather slips it deftly. Mayweather is a master of defense. But he’s holding a lot.

Maidana blocks a left from Mayweather. Floyd counterpunching brilliantly tonight. Maidana goes after Mayweather in the corner but again, Mayweather slips from his grasp. Mayweather is pushed down, and Bayless takes a point from Maidana. Maidana going for it in the corner against Floyd. He senses an urgency about needing to do something big with two rounds left. Floyd gets a 10-8 round. But avoids any warnings for holding.

Maidana swinging aggressively and wildly, but Floyd counters with a left. Bayless stops it when Floyd hits below the belt. Maidana connects with a hard left to the solar plexus. Floyd extremely accurate tonight. Mayweather connects to Maidana’s head with a left hand. Maidana continues to be frustrated by Mayweather’s movement (he will call it running). The fighters come together at the bell with a flurry, but it’s another Mayweather round. Obviously Maidana needs a knockout.
Mayweather 9-2

Mayweather moving around and avoiding whatever Maidana can throw at him. Maidana knows he needs a KO and is looking for the right shot. Mayweather is not terribly exciting to watch, but he works the sweet science to perfection. Maidana corners Mayweather and lands a flurry. And it’s over. Maidana takes the 12th round because he was more aggressive than Mayweather who just avoided trouble. Mayweather connected on 51% of his punches to 22% for Maidana.