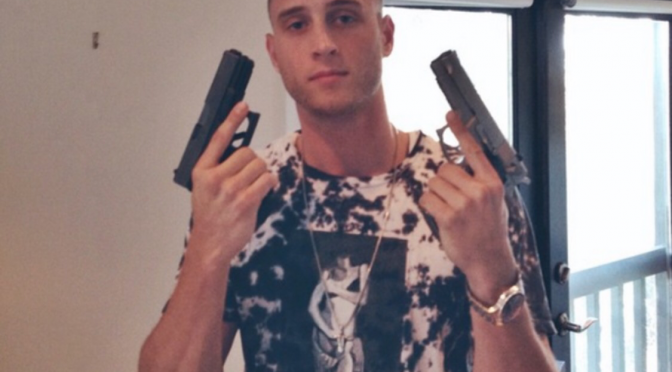 The younger Hanks, a rapper who goes by the stage name Chet Haze, is defending his use of the racial slur following a flurry of angry comments on his Instagram page after he used the N-word in a photo caption over the weekend:

“If I say the (N-word) I say it amongst people I love and who love me. If I say “(expletive) yall hatin ass (N-words)” it’s because that’s really how I felt at the time. And I don’t accept society getting to decide what ANYBODY can or can’t say. That’s something we call FREE SPEECH. Now I understand the older generation who grew up in the Jim Crowe era might have strong feelings against this. And that’s understandable… But what I’m saying is this is 2015… And even tho we are still far from where we need to be and black people are still being literally KILLED by a RACIST and (expletive) up system… We have also reached a point where the word can no longer have a negative connotation if we so choose. And who is to say only black people can use it? The way I see it, it’s a word that unifies the culture of HIP-HOP across ALL RACES, which is actually kind of a beautiful thing. It’s a word that can be used out of camaraderie and love, not just exclusively for black people. What’s the point in putting all these built up ‘rules’ about it. It’s time to let go. You can hate me or love me for it, but can’t nobody tell me what I can or can’t say. It’s got nothing to do with trying to be a thug. It’s about the culture of the music. And that’s all I have to say about that (no pun intended) lol. It’s all love. Some people will get it, some people won’t. Either way, Ima keep living my life however the (expletive) I want. ALL LOVE.”