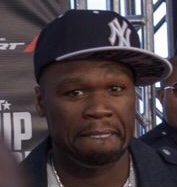 The multi-picture deal marks a substantial 8-figure investment in 50 Cent and G-Unit Film & Television from 3BlackDot, which will act as financier and studio across all the films. The three entities will collaborate on each film, while also utilizing 3Blackdot’s unique in-house resources in gaming, publishing, and merchandise to simultaneously build out complete entertainment properties around each narrative. The film IP will then be leveraged using Jackson, Roth and 3Blackdot’s expertise to platform into a 360-degree experience across video games, publishing and merchandise.

The newly formed film partnership is predicated on producing diverse and innovative world-building genre films that feel like ground-breaking events with global reach for horror enthusiasts.

Roth is one of the premiere names in horror, directing and producing titles such as Cabin Fever, Hostel, Hemlock Grove, and being a founder of Crypt TV. His next movie is the upcoming BORDERLANDS for Lionsgate.

The idea for the joint slate was born out of 50 Cent, Eli Roth, and James Frey, who oversees all creative development and production for 3BlackDot, coming together.

Eli, James, Roger, Michael, and 3BlackDot will be great partners in G-Unit Film and Television’s takeover of the horror genre. I can’t wait to show the world what we’re building. Said Curtis “50 Cent” Jackson.

“I am so excited about collaborating with 50 Cent, James Frey and the whole team at G-Unit, 3BlackDot, and the incredible producorial team at Arts District of Roger Birnbaum and Michael Besman. Both 50 and James have never shied away from controversial, boundary-pushing material and have made massive global cultural impacts from their raw creative energy. We want to bring that same fun and danger to this new fantastic slate of elevated scary films. We want to make the movies others are too afraid to make” said Eli Roth.

James Frey added “50 and Eli are both great friends of mine, great collaborators, and both real visionaries. I can’t wait for all the fun we’re going to have together.”

“As a cutting edge studio we’re committed to developing and financing perspective-altering content experiences that become cultural movements,” said 3Blackdot CEO, Reginald Cash.” As a creator and entrepreneur, Curtis has an unparalleled track record for infusing entertainment into the cultural zeitgeist,” Cash continued. “With G-Unit Films, we will reimagine horror through the lens of the urban experience and extend storytelling in new and innovative ways.”

Jackson will have significant influence over the creative direction of each film and each of these ancillary avenues. The mega producer possesses over two decades of expertise as a cultural icon and has previously developed and released two best-selling video games BULLETPROOF and BLOOD ON THE SAND. 2020 continues to be a banner year for producer and recording artist Curtis “50 Cent” Jackson. G-Unit Film and Television is coming off record ratings and a Season 2 renewal for Power Book II: GHOST (starring Mary J Blige and Method Man), the first of four green-lit POWER spinoffs. Additionally, G-Unit is ramping up for Season 1 production on BLACK MAFIA FAMILY at Starz and are already in production on Season 2 of legal drama FOR LIFE, ABC’s number one new drama series. This partnership with 3BlackDot marks the continued expansion of G-Unit Film & Television via a $150M overall deal inked at Starz/Lionsgate in 2018. The G-Unit slate also includes A MOMENT IN TIME: MASSACRE and UNT. FEMALE SPORTS AGENT at Starz, animated TRILL LEAGUE at Quibi, and T.I. lead TWENTY-FOUR SEVEN at Paramount+ among many other upcoming and to-be-announced projects.

Jackson is represented by APA and attorneys Eric Feig and Stephen Savva.