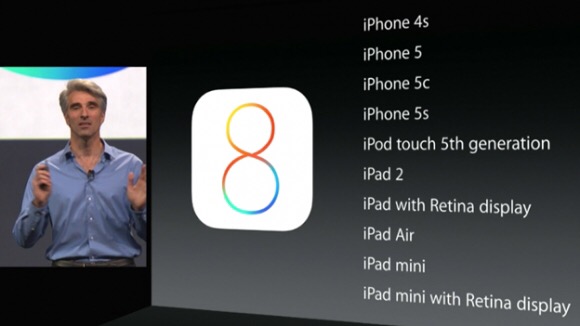 “iOS 8 is finally here! I can’t wait to downl — wait, 6.8 gigabytes!? Who even has that much space? And why aren’t my apps working anymore?”

That was the general reaction when Apple’s iOS

8 software update dropped with a giant thud on Sept. 17. In addition to asking for around half of most iPhone owners’ useable storage, iOS 8 has been causing a myriad of technical errors for users, especially ones with older devices.

On top of lost data, it looks like iOS 8 is causing random crashes for users. App integration for Health and HealthKit is limited at the moment due to a software bug, and one user reported seeing his drop-down notifications freeze at the top of the screen.

Update: iOS 8 can be downloaded right now. Some features need the still-to-come Mac OS X Yosemite, but here are Apple’s best features.
Apple has taking the flat iOS 7 design and rounded it out with new features with iOS 8, and it’s availableto download right now, two days ahead of the iPhone 6 and iPhone 6 Plus launch.
That means instead of a dramatic redesign, this year’s mobile operating system update ties everything together with the overarching theme of “convergence.”
iOS 8 features tighter Mac OS X Yosemite integration while loosening the restrictions on Apple’s Touch ID fingerprint sensor. This goes a long way to the Passbook-integrated Apple Pay.
New software kits also bring once fragmented security and health gadgets together, something that this year’s “one more thing” surprise, the Apple Watch, will takes advantage of in early 2015.